I’m starting a series of blog posts that talks about relationships, dating and marriage. I love talking about these topics to encourage and to try in my own little way, help people; single or married, to pursue God’s best in their relationships. Hopefully, this is a start.

A few days ago, I read something in social media that goes like this… 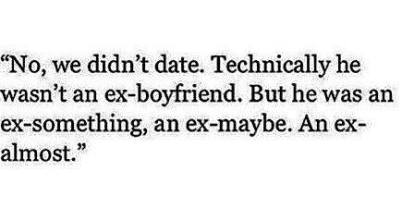 Now that’s a statement that’s very confusing right? How can someone be just an ex-almost? It’s sounds funny at first but if you come to think of it, it’s actually a reality for some people. It’s the reality of making someone feel that you’re in love with him/her but with no intentions of actually being committed with that person.

Have you ever heard the term – Define The Relationship? If not, let me for a while illustrate it for you.

Now imagine, here’s a guy who loves inviting the girl out for lunch or dinner, who loves to message or call her at the wee hours of the night, who loves to give gifts to her and tells her it’s just a gift, nothing special, who loves to make her feel special whenever she’s around and then finally after all these things that he’s doing for her, the girl suddenly thinks and I mean, thinks critically about asking the guy about the questions on her head. Questions like these…

What are we? I was just thinking, what do you call us? Are we dating? Are you courting? Do you like me? Because, now the girl is confused and probably wondering if the guy can actually DEFINE THE RELATIONSHIP. This is the moment that guys are dreading about. It’s their worst nightmare coming to life, because they actually thought that maybe it would be enough for the relationship to just stay that way. Nothing official, no commitments, no reason to define the relationship.

That’s a very uncomfortable situation right? But that’s the reality for some people. I don’t know if you’ve ever felt or experience that kind of moment or probably it’s just now that you’ve realize that, that’s exactly the questions you were trying to ask yourself about.

Now let me share some things that hopefully could help you experience more of God’s best in this area of your relationship.

Sometimes, in order to man up, you should speak up. If you want to make her fall in love with you, she would appreciate it very much if you could do it the right way. Don’t make her feel special if you don’t have any intentions of telling her what you feel. Don’t try to test her feelings by doing favors for her so you would know if you would have any chance first before you try to pursue. If you think you’re ready for marriage then pursue her with everything you’ve got, tell her about your intentions. I’m not saying that the result will immediately be in your favor, maybe not, but there’s only one way to know, right? And if it doesn’t go in your favor, accept it as a man. Still, hope for the best as you pursue her.

Laying down your intentions to her is one way of defining the relationship right. You’re actually telling the girl that you respect her enough that you don’t want to confuse her.

Don’t settle for anything less than being pursued the right way. If he likes you then let him tell you. If you see no signs of his intentions, only signs of persuasion to make you respond to him, then probably you’re just wasting your time trying to entertain his actions. I’m not saying that you wait for Mr. Perfect to come your way because no guy is perfect. But if you can ask God to bring someone in your life who might not be perfect but would respect you and pursue you the way God wants you pursued then it’s worth it.

Never ever try to pursue a guy. With our culture today, this might sound old school but if you will start pursuing a guy, you will be pursuing that guy for the rest of your journey. Don’t take away from a guy the opportunity to run after the woman that she likes and going for it as a man. Don’t ever fall into the lie that if you won’t start pursuing guys then you would lose your chance in ever getting a husband in the future. Singleness is a blessing not a curse. Probably that’s the first thing that you need to first realize in your life. Marriage is also definitely great but God designed marriage in a way that a man has to leave his parents and hold fast to his wife. Even in marriage it is the guy who was designed to initiate. Let him experience how it is to run after you with all the right intentions and for all the right purpose.

Ask yourself these questions.

How much more am I willing to invest emotionally to this guy even If I don’t see him ever getting ready to pursue me?

Am I satisfied with a relationship that’s not properly defined?

Am I considering a boy who’s after my heart or would I want a MAN who’s after God’s own heart?